Paragliding is open in Bir Billing along with other adventure activities.

Flight time of Paragliding is 15 to 20 minutes.
Climate is cold, with temperatures from 5 to 25 degrees centigrade in winter and 25 to 30 centigrade in the summer season.
Launch site of paragliding at 8020 feet from sea level.
Landing site at 4350 feet from sea level.
Price is ₹ 3000/- Per Person for this session.
Minimum Age required for Paragliding is 12 Years.
Weight limit is 30 kg to 90 kg, if weight is more then 90 to 110 kg, pilot charge INR 500/- and subject to weather and fitness of guests.
Route followed as per wind direction and normally — Billing – Bari – Keyori – Chougan – Landing.
Transportation from Meeting Point at Bir to Launch site of Paragliding at  Billing which is 18 km uphill is included. Aldo pick from hotels if its located in and around Bir.
Complimentary GOPRO video of Paragliding is provided. Ask your pilots for complimentary video of activity.

Paragliding is Open in Bir and Paragliding activity is operational at Bir Billing from 16 September, open in months — October, November, December, January, February, March, April, May, June, till 15 July.

Price for different Paragliding session as per time duration .

2. 20 to 30 minute paragliding session in Bir Billing.
INR 3500/- Per Person Per Paragliding Flight

Things to know about Paragliding activity before doing it in Bir Billing.

Safety of Paragliding in Bir Billing

Most of the pilots in Bir Billing are associated with Billing Paragliding Association. Pilots of BPA have no major accident record and pilots flying safely. Types of equipment like gliders, reserve parachute, lines, carabineer, harness, buckles of it. “BPA” organized time to time guidelines for pilots for safety. Travel Bir Billing pilots registered with BPA.

Now BPA has decided to build a rescue team at Bir Billing for Paragliding and compulsory accident insurance to each tourist flying here to make sure safe and secure paragliding. Each pilot is now restricted to the limited number of Paragliding sessions each day. During winters – 4 paragliding sessions and in summers 6 sessions, which make hustle-free and controlled flights.

Each pilot must need a valid license registered with any association, medical examination after every 6 months, approved checked glider.

Now the rates for Paragliding are also fixed as INR 3000/- as the minimum flying price rate to tourists traveling to Bir Billing valley. Anyone charging lower than this fined and agency banded for flying for a week.

All the guidelines implemented from 1 March 2022.

In the 1980’s French Pilots recognized “Bir Billing” as the best favorable condition for flying and introduced Hang Gliding. Hang gliding is very difficult at that time as pilots need to carry heavy metal frames and canopy to the Paragliding take-off point which is 14 km uphill. The road was not there to Billing at that time, so need porters and mules to carry, which was not possible to all pilots.

Paragliding in Bir Billing was introduced in the early years of the 1990’s by ‘Bruce Mills’ who was a new-Zealander pilot and well known in Bir Billing valley which started attracting many pilots to try hands in paragliding here. Later it becomes popular among locals of Bir and they start learning paragliding. Now in year 2000′ onwards, Bir Billing started tandem paragliding – means a paragliding flight of two people (one as pilots and the other a tourist)which introduced commercial activity and employment to local inhabitants of Bir.

Bir Billing attracts international solo joy riders from all over the world from October, and November till mid-December. Climatic conditions are best favorable for long paragliding during this period. Pilots experience cross-country flying – which means can fly 5 to 7 hrs in a day. Bir Billing attracts more than 500 solo pilots every year that stayed for 30 to 60 days and fly every day. Conditions and long flying experience over the Himalayas, snow-covered mountains, and safe conditions for experienced and learners as well.

The longest flying record is also at Bir Billing which is 253 km in a single flight, conditions for the long flight make Bir Billing a favorite paragliding destination among paragliding pilots.

When to visit Bir Billing for Paragliding?

Best time or best season for the Paragliding.:- Paragliding is possible throughout the year except for the monsoon. Monsoon here from early July to late September. Monsoon here is with very heavy rain from July to September, which is the time when paragliding is closed in Bir Billing. Bir Billing is located in the foothills of the Dhauladhar mountain range of the Himalayas , which provide amazing weather conditions throughout the year.

But the best period for Paragliding is divided into two parts.
October to June is the season for paragliding. Even October – November and March – June are the best time for long flights.

Paragliding experience during December, January is different as all the mountains around covered with snow, even Billing experience snowfall during that period. Most of the travelers choose this period for camping and paragliding in Bir Billing valley.

How to drive or reach to Bir Billing?

Distances and route to Bir Billing.:-

These are the routes to reach Bir Billing. If you driving your car then the best route to reach Bir Billing is Route -1. This is a bit long but safe and smooth. Other routes can be used if you driving from nearby destinations like Manali and Dharamshala. Route from Pathankot can be followed if you traveling in Train till Pathankot or visiting Vaishno Devi temple and the planning to visit us.

Visit our blog for more information. the nearest bus stand is at Baijnath which is 12 km. from Bir. Baijnath is well connected with daily buses from Delhi and Chandigarh. There are 02 Volvo buses daily to Baijnath starts at 2145 hrs. and 2245 hours from ISBT Kashmiri gate New Delhi respectively. One can book from buses from Delhi to Baijnath from HRTC online portal by clicking here on the link. Other deluxe, semi-deluxe and ordinary buses provide their services to Baijnath. If you want more options, you can take a bus to Dharamshala, where many Red bus operators run their buses daily. And get a local bus to Baijnath which takes 2 hrs. from there. Just let us know your plan so we can advise you with full details of routes and nearest stops. Other options by bus from Delhi to Chandigarh and then hire a cab to Bir from Chandigarh as it makes your travel easy, safe, comfortable, convenient and cheap.

What to do here gliding destination in Bir Billing other then Paragliding:-

Bir and Billing are twin destinations with other options nearby places. Many are hidden and many are known. We are committed to providing the best information to our guests. Some them as below:-

Some destinations are nearer and some are far. So, we need to know your interest to suggest other palaces to see here and things can be done.

LIST OF THINGS TO CARRY FOR TREKKING AND PARAGLIDING:.

Other Location of Paragliding in India.

Camping in Fixed Tent at Camp Oak View and Paragliding.

Camping in Machaan Tent at Camp Oak View and Paragliding in Bir Billing.

Visit Our Gallery for Pictures of Camp Oak View – Camping in Machaan Tent at Bir Billing. 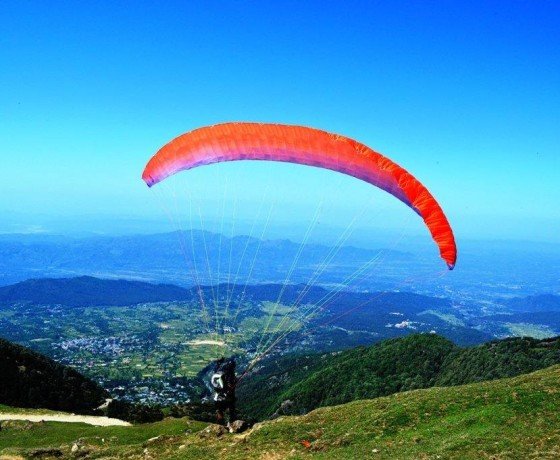 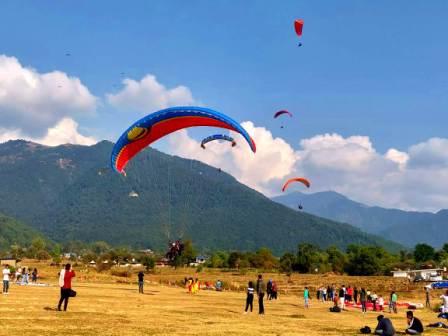 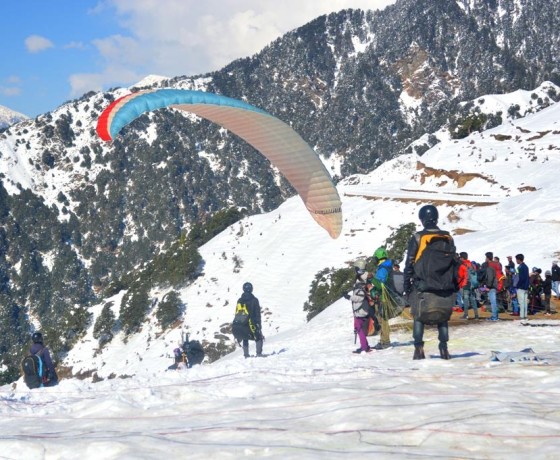 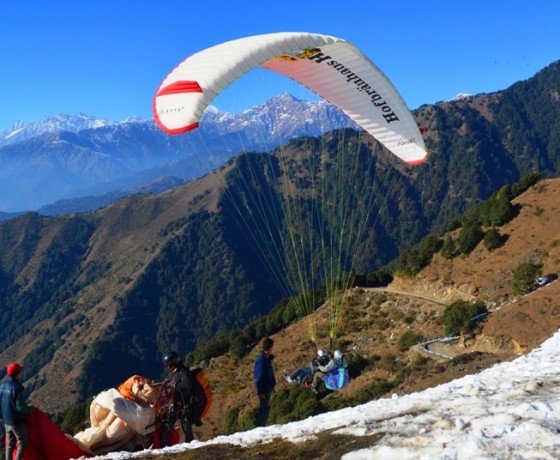 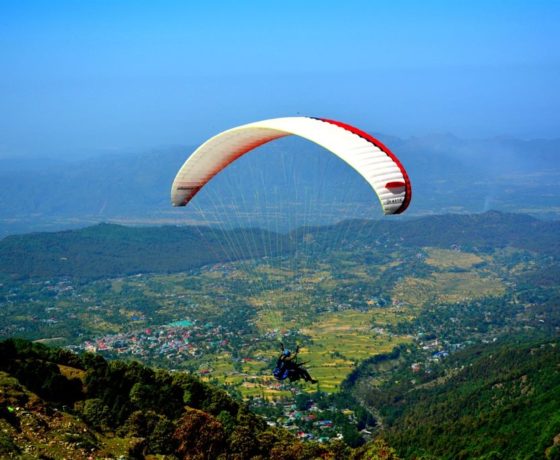